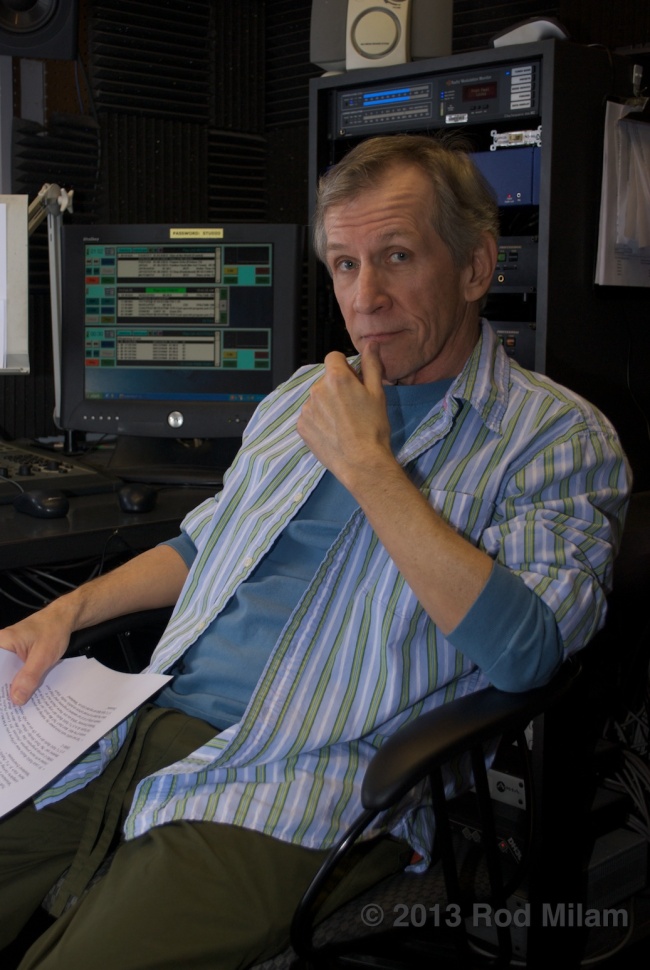 Bob McCabe looking pensive, knowledgeable, relaxed, and totally at home in “air control” at the University of Missouri St. Louis studios of KWMU in February of 2010.

For morning listeners of public radio in St. Louis over the past 20+ years, this is the face to put to the voice and name of Bob McCabe that you’ve been waking up to and driving to work to while listening to either the news or classical music.  I shot this picture when I was back in St. Louis in 2010 to record and live stream St. Louis local, fellow U. City alum,  and world renowned jazz pianist Peter Martin in his inaugural Peter Martin Music: Live! series with guest Diane Reeves.  Peter was at KWMU to do and interview for Cityscape, and I had a quick bit of time to talk to Bob and catch up with him between breaks in programming.

I had the pleasure to not only work with “Bob” when I was an intern and an employee on the air at KWMU from 1992 through 2000, but I also knew “Mr. McCabe” when he was my home room teacher during my senior year of high school at University City Senior High.  He was an English teacher at the high school for years and my guess is that most radio listeners didn’t know that.

And on top of that, before I re-met Bob as a colleague and not a student, I found out that he spent 11 years working in the Catholic ministry and time singing and recording with the St. Louis Symphony Chorus for two seasons, and working in other areas of St. Louis theater community.  And my guess is that most radio listeners didn’t know that either.

In spite of our completely goofy relationship that we ended up having when the “on-air” light went off in the studio, I always went away impressed with the rich and diverse life that Bob insisted on carving out for himself.  I used him as one of my examples of someone that was not afraid to follow a path that may seem very different and disparate to others, but right for himself.  This is an aspiration I think I have been able to mainly achieve, especially since I can count a full 5 different careers that I’ve had already. (I think I’ve gone a bit overboard on that diversity thing.)

So with a bit of a sad heart and a hat tip for inspiration, I wish both “Bob” and “Mr. McCabe” the best in his retirement from one of his many careers, and I know that I’ll miss hearing his voice from half way across the country in New York City online.  I don’t know what it is about us St. Louisians and our radio hosts, but I have no one I’d rather listen to during morning drive than Bob on my iPhone 1000 miles away.  I still  wish that he wouldn’t leave the air, but he’s going to do what he wants, so that’s going to be good enough for me.

So after the end of June, 90.7FM in St. Louis won’t be the same, and neither shall I.  Thanks, Bob!  Thanks for everything!