Local NYC Media Comes To The Neighborhood (Too Early) 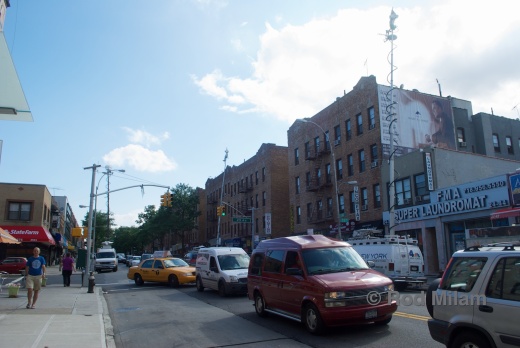 A picture of the far end of “Little Cairo” on Steinway Street at 25th Avenue in Astoria Queens.

My New York City neighborhood, Astoria, Queens, has had some of its citizens used as subjects of ethic genetic studies. The result of those resolved that the square mile within where I live is the most ethnically diverse square mile on the planet Earth. Given that fact, it’s not remotely unusual to note that there is a significant Egyptian population around the corner from me.

With the overthrow of the elected Egyptian President Mohammad Morsi taking place earlier this afternoon (EDT), I decided to go to Steinway Street between 28th Avenue and Astoria Boulevard to see if there was any outward reaction yet to the news.  This segment of Steinway is home to many Middle Eastern and North African shops, restaurants and a mosque that services not just all of the Astoria area in general, but the people who may be originally from countries in the Mideast and the Maghreb in particular.  When arrived, I saw that all of the local CBS, NBC, ABC, and New York 1 TV trucks were on site as you can see above.  I knew that they were really there too early to see what might really happen later because most of the people that spend time on that part of the block will come out at night.

The cameramen and journalists that were just walking around the sidewalks not actually doing any reporting didn’t seem to know that nothing would really happen until after sundown (since none of them even remotely looked like they were from the neighborhood) started to peel off.  NY1 actually looks like it’s going to stay to see if they can talk to some folks later on, but the other stations probably just wanted to get a quick live TV shot or some other immediate reaction for the 6:00 news.

Meanwhile, since these folks are my neighbors and I’ve lived here for years, I just went and asked some of the store and shop owners what they thought.  In general, they seem to think what happened was inevitable and was for the good overall.  They plan on getting more in depth news all at once late tonight when they all get interviewed and the latest news from Egyptian media on the ground.

I’ll see if I can go back later tonight to get some pics and info about the situation. If I can. I’ll update things here.  Pays to know some sources, eh?