(l) A University City neighborhood during a hail storm at about 1:30pm on April 2, 2014, and (r) the aftermath of a probable tornado that passed through U. City in a different section of town at 5:20am on April 3rd.

The weather in March of 2014 in St. Louis/U. City may have come in like a lion and gone out like a lamb, but April has shown that it refuses to be upstaged in the drama department by its predecessor on the calendar.

On Tuesday afternoon, April 2, 2014 at about 1:30 a fairly strong, but typical, thunderstorm was passing over University City.  There didn’t seem to be any excessive wind.  But the large falling rain drops slowly converted into larger, grape-sized hail stones that came pelting down on the middle third of the city and left a layer what looked like snow blobs on every flat surface.  (Click here to see the hail storm in action.)

This hailstorm was part of a series of other storms that hit in the region. The video I posted was interesting enough that both ABC’s and NBC’s evening news programs wanted to use the video for their broadcasts.

The ABC Evening News With Diane Sawyer used the linked video to talk about this and the other storms that passed through the Midwest on the anniversary of the largest recorded outbreak of tornadoes ever recorded.

Then, as if the dinged cars, bruised tree buds, and gumball (sweetgum) cull wasn’t messy enough as a result of that storm, only 16 hours later at about 5:30am on Thursday, April 3rd while I was working a graveyard shift in Earth City, my father reported hearing the tell-tale “freight train” sound during another round of thunderstorms passing through U. City.  Sure enough, given the path of downed trees, shingle deprived roofs, and toppled power lines, it appears as though a low-grade tornado made its way through town.

This is the path of the twister that I estimate based on the number of downed trees and level of detritus I observed as dawn broke.

By the time I made my way back east to town, the University City police had shut down McKnight road from one end of Ruth Park to the other because of a number completely uprooted trees and telephone polls.

These city worker trucks are about a block away from the biggest damage, but this street suffered quite a bit as well.

Fortunately, it appears that the initial touchdown hit over the town’s public golf course (Ruth Park) which is only permanently populated by rabbits and squirrels in the pre-dawn hours and was certainly empty of the local duffers that may have been out during daylight hours on a nicer day. 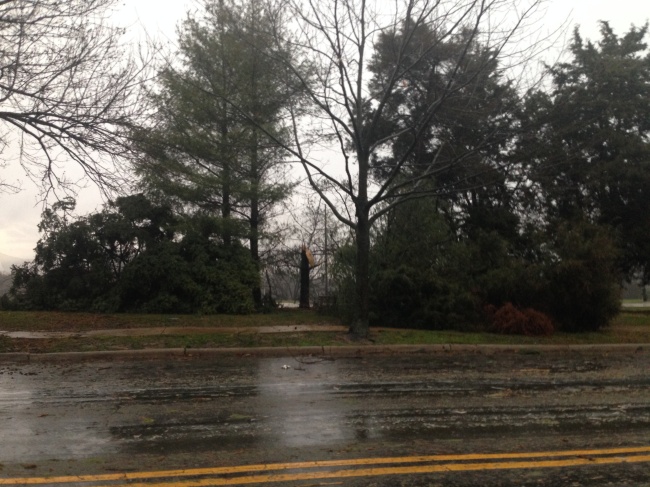 The last thing that these felled old evergreens gave the city was a distinct aroma of pine from their abrupt and harsh last nights sleep on Groby Road.

Moving southeast away from Ruth Park, there was more evidence to be found about the path of the twister. 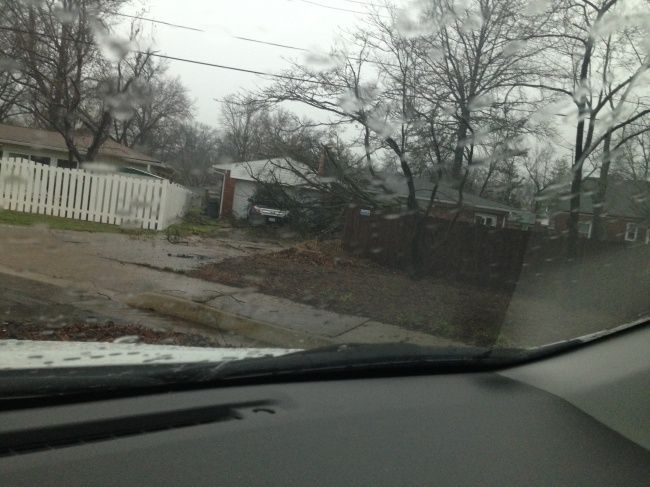 No one in this house off of Old Bonhomme Road was reported as injured. Certainly they’ll have to be on the phone to both their home and auto insurance companies later on today.

Then even further southeast on Gannon Avenue, a sight that I’ve never seen went by…a Metro (Bi-State) bus was diverted from Delmar Boulevard down this damaged street because a big section of Delmar was shut down because of more downed trees and a broken gas main.

This big bus had to bob and weave its way down this tiny side street since I didn’t fair much better than the main drag that it usually travels.

At the time of this post, I’ve seen no official word of whether or not this was officially a tornado nor any word on what strength the twister may have been.  Having seen much worse post tornado damage in the past, I guess that this was a low-level one at best, maybe an F0 or F1 on the Fujita Scale.  Most importantly, it doesn’t appear as though anyone was hurt.  But even if this wasn’t the strongest tornado to have ever hit this area of St. Louis, it was bad enough for those that it hit directly.  More news will certainly come out in the coming hours.  (Hopefully, most of it benign. )